More than any other object, balloons symbolize and epitomize fun. But more advanced versions, those not seen and popped in birthday parties, can play a vital role for humans as they soar into the atmosphere to provide scientific data.

As a post-doctoral researcher from the Institute of Atmospheric Sciences at Fudan University, Zhang Peng, 33, knows the value of such balloons.

He uses them to record atmospheric measurements.

Established nearly four years ago, the institute researches polar regions, specifically how they affect the global and regional environment, ecology, weather and climate.

While radiosonde balloons are not new－they have been used by scientists since the 19th century to gather information required for weather forecast and climate research－what Zhang is also doing with them is.

In September, on his maiden journey to the Arctic, Zhang released 150 radiosonde balloons that he says will be integral to helping scientists learn more about storms in the region and how they might be related to severe weather conditions in other parts of the world.

It was only three years ago that scientists first released radiosonde balloons in the Arctic. It's too early to talk about the significance of such work as we are still working on the data collected during the 53-day expedition, says Zhang. 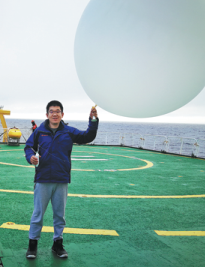 On one occasion, a balloon managed to record data from a storm it was caught in. Zhang says it is rare for a balloon to manage to capture information from inside a storm above the Arctic.

During this expedition as a guest researcher with the Korean Polar Research Institute, Zhang was responsible for releasing a radiosonde balloon every six hours. This task is not as straightforward as it sounds because severe weather conditions played havoc with the timetable. There were times when he had to delay the balloon release by an hour or more so that the winds were favorable.

I often had to walk from one end of the icebreaker to the other to find the best opportunity to release the balloons. There was nobody on deck at midnight and the ship was bouncing up and down because of the strong waves. There was a chance that nobody would know if I fell into the sea. It was a very scary experience, he says.

But I repeatedly reminded myself that I had to conquer my fears in the name of scientific research.

They also faced other problems during their scientific endeavor. On one occasion, scientists had to search for several days before finally coming across an ideal location to deploy three ocean buoys. Just a week later, the researchers discovered that the buoys were damaged by polar bears.

It was fairly difficult to collect pieces of data in such untraversed places and every tiny breakthrough in theory originates from progress in observation, he says.

According to Zhang, there were more than 30 foreign researchers like himself on the icebreaker, with two－an American and a South Korean－working on research that is similar to his.

The other researchers, who hailed from Russia, the United Kingdom, France, Italy, Croatia and India, were looking at areas such as Arctic atmospheric conditions, the marine environment and chemistry.

International collaboration is vital in scientific research as it allows scientists from different countries to gather various resources and reach a shared goal that benefits mankind, says Zhang, adding that his fellow researchers who worked with radiosondes also shared their findings from the expedition.

Besides being a fruitful scientific undertaking, the expedition was also an eye-opening experience for Zhang, who got to witness the severity of the decline of the Arctic sea ice due to global warming.

Seeing the situation with my own eyes reaffirmed my belief in the mission of our jobs as scientists, he says.